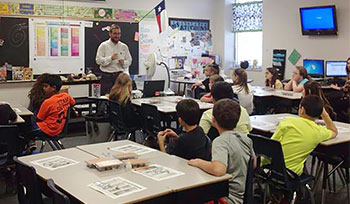 Too often are the natural sciences overlooked during the education of our young children. This program directly address this deficiency. Earth science is similar to many ofter science and engineering disciples in that it has a perception of low ethnic diversity as well as a gender bias. Whenever possible we organize events during times which both a male and female presenter are available. We additionally encourage the involvement of minority scientists.

TO BE CLEAR No political ideology is presented to the children, we simply train them to utilize the scientific method and use their brains.

See a Picture from one of our Recent Talks Below:

© University of Houston. All rights reserved.